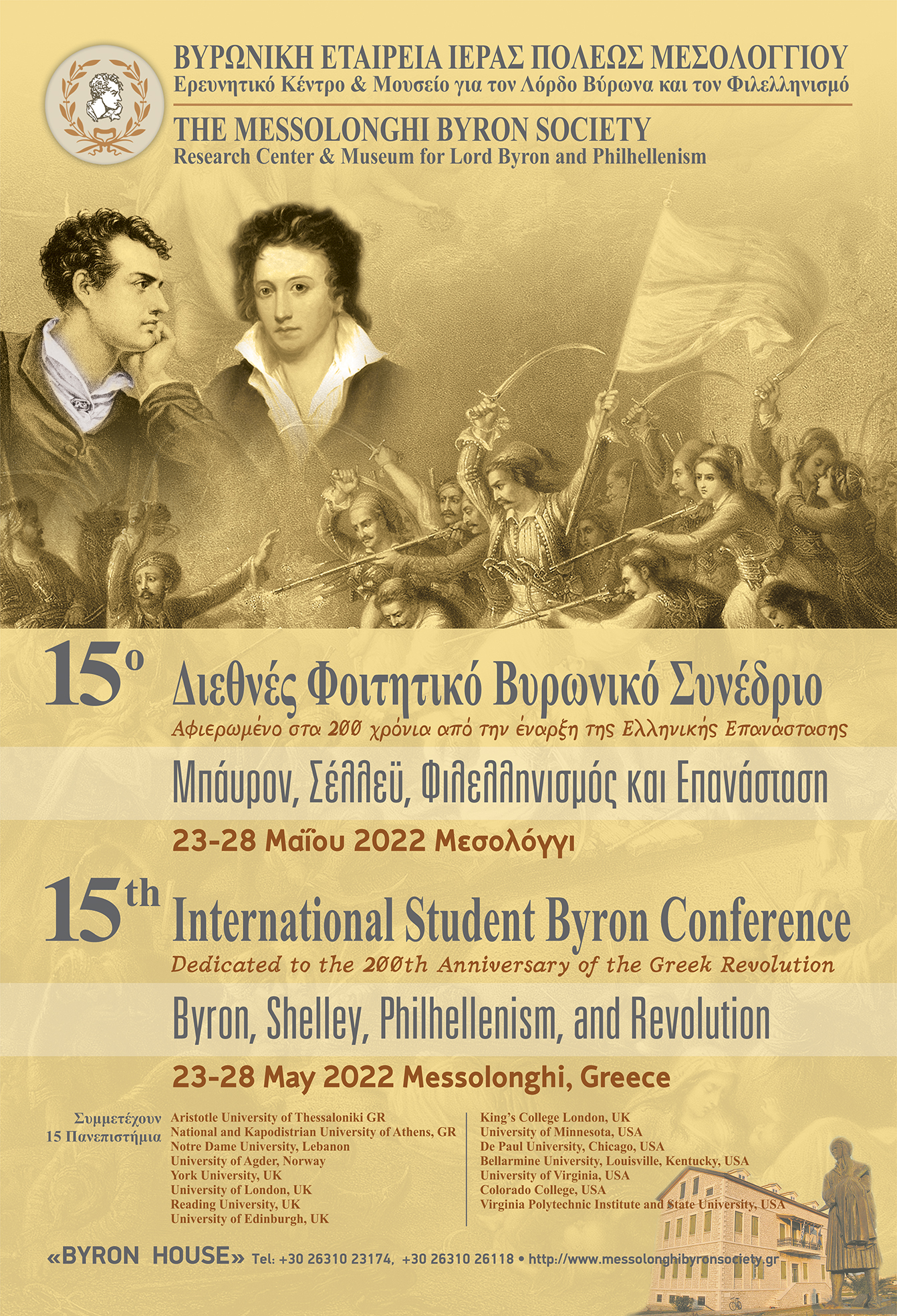 Museum for Lord Byron and Philhellenism

The Messolonghi Byron Society is a non-profit organization founded in 1991 in Messolonghi, Greece. We are devoted to promoting scholarly and general understanding of Lord Byron’s life and poetry as well as cultivating appreciation for other historical figures in the 19th-century international Philhellenic movement, idealists who, like Byron, gave their fortunes, talents, and lives for the cause of Greek Independence.

With gracious cooperation from the local people and Authorities, the Greek and the International Byron Societies and individual Byronists from around the world, the Messolonghi Byron Society has grown in size and prominence by organizing many local, national and international activities dedicated to the memory of the poet. Among these activities have been International Conferences, lectures, one-day sessions, staging of plays inside and outside Greece, participation in British and Greek festivals, competitions, cultural events involving speakers and groups from England and America, exchanges, hospitality to Byronists from around the world, and twinning of Messolonghi and Nottinghamshire schools.

The Byron Society has published a historical guide to the Monuments in the Garden of the Heroes (in four languages), and has established a collaboration with the English Faculties of the University of Athens and the Aristotle University of Thessaloniki. The foundation of the International Research Center for Byron and Philhellenism in October 2001 was an important and catalytic event in the society’s recent history, and inaugurated by the Prefecture of Aitoloakarnania.

We are grateful to the generosity of the Mayor and City Council of Messolonghi. The Messolonghi Byron Center is now located in the upper floor of Byron House.

Messolonghi is a small Greek city on the north shore of the Gulf of Patras. Picturesquely located between craggy mountains and Europe’s largest lagoon, Messolonghi boasts a thriving fishery, a world-famous sea-salt industry, olive and lemon groves, a distinguished artistic community–and a sacred place in Greek history. Birthplace of five Greek prime ministers, Messolonghi was the western center of the Greek war of independence from the Ottoman Empire. Here the celebrated English poet and Philhellene Lord Byron came to devote his talents and fortune to the Greek revolutionary cause–and here he died of fever on April 19, 1824.

President of the Messolonghi Byron Society and its Byron Research Center

On behalf of the Messolonghi Byron Society and its Byron Research Center, I would like to extend a warm worldwide welcome to students, scholars, and others who are devoted to Byron and his works, plus other literary figures of the philhellenic movement.
We invite you to visit the sacred city that was the endpoint of Byron’s last pilgrimage and look forward to sharing Messolonghi’s beautiful natural environment, and the distinctive cultural, historical, and academic recources with you.