Introduction to our collection of Philhellenic Poetry

About one-third of these philhellenic poems by Americans inspired by the Greek Revolution of 1821 were located in the Newberry Library of Chicago by Alex Papas and used in his M.A. thesis at Roosevelt University in 1958.
The remaining two-thirds of American and all of the British poems were found by me in the Library of Congress, N.Y.Public Library, the Library Company of Philadelphia, and the university libraries of Columbia, N.Y.U., Virginia, Florida, Cambridge, Oxford, and London during 1957-1997.

My research was mostly conducted in the RareBooks Collections and the shelves of bound volumes of newspapers, periodicals, yearbooks, and souvenirs of the above libraries, covering the years 1821 through the War Between the States and even later, as a few items were inspired by the Cretan Revolution of 1867 and Greece’s victorious participation in the First World War.
Some one hundred of these American pieces were compiled and discussed by Papas and me in two volumes published by the Institute for Balkan Studies in Thessaloniki (1972).
These were awarded an Academy of Athens Prize in 1975. 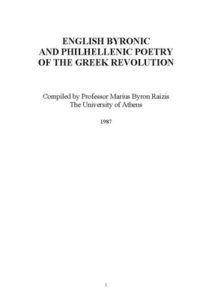 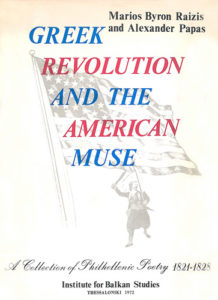