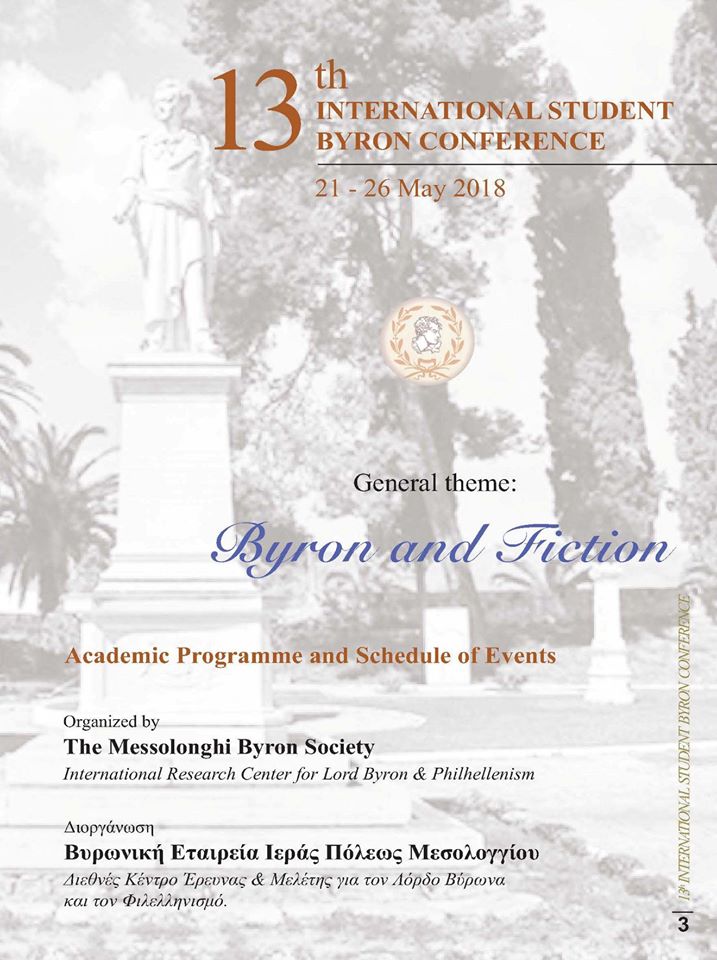 The Organizing and Academic committees would like to give you a general outline of the activities that include the Academic Programme (student papers and lectures by professors) and the Social Activities (receptions, excursions, visits to historic sites, entertainment). We reserve the right to make changes if necessary and will have a final programme handed to you on 21 May 2018. You will be staying at the Theoxenia Hotel by the Messolonghi lagoonside, Tel: +30 26310 28098.

Please note that due to the constraints of academic and personal schedules, some participants will not be able to attend the entire conference. Accordingly we have grouped the academic sessions tightly on the days when all participants will be in attendance so that even those who are obliged to come late or leave early will experience as fully as possible the evolving conversation on “Byron and Fiction.” To allow the conference to proceed on schedule, the papers must not be longer than 20 minutes.

17:00- 18: 00 Registration at the administrative office of the Messolonghi Byron Society and its Byron Research Center in the Byron House.

18:00- 18:30 Visit to the cathedral of Agios Spyridon, visited by Byron, and where his lungs were kept in a silver box until 1881. Since 1881 the silver box is under the foundation of his marble statue in the Garden of Heroes.

18:30 -19:30 Visit to the Centre of Literature & Arts “Diexodos” Historic Museum, for a photo exhibition by Nikos Aliagas, entitled ‘’Test of Time.”

20:00 -21:00 Visit to the Municipal Museum of History and Art Municipal Gallery with a welcome ceremony by the Mayor of Messolonghi, Mr. Nikolaos Karapanos.

10:00 -10:30 Following Byron’s footsteps in Messolonghi.
Wreath-laying ceremony at the monument newly renovated by the Messolonghi Byron society, at the site where Byron breathed his last on 19 April 1824, and where the University of Athens dedicated a memorial column to Byron to commemorate the centennial of his death.

10:30- 11:30 Visit at the House-Museum of the prominent statesman, diplomat, and historiographer of the Greek Revolution of 1821 Spyridon Trikoupis, who delivered Lord Byron’s oration. In this house, his son Charilaos Trikoupis spent his boyhood years. He became one of the greatest statesmen of modern Greece, a dominant figure during the second half of the 19th century, and seven times prime minister of Greece.

11:30- 12:30 Visit to the Garden of Heroes stretching alongside the defensive walls of Messolonghi, big memorial garden with many monuments dedicated to Greek fighters and to Philhellenes who fought and fell during the siege and the Exodus (sortie). At the center of the Garden of Heroes you will find the grave of Markos Botzaris as well as a statue of Lord Byron, underneath which are buried the poet’s lungs.

WEDNESDAY 23 May 2017 Papers in the Byron House

The Ceremony will end with a Gala dinner in the Ball Room of the Theoxenia Hotel.The Gala also includes music and Greek traditional dances.

10:00 Visits:
-To the Chapel of Panayia Finikias, the island chapel dedicated to the Virgin of the Palms, where Byron used to ride at sunset from Messolonghi and where he fell ill under the heavy rain on 10 April 1824.

-To the archaeological site of ancient Plevron, named after the mythical hero Plevron. Plevron actually consists of two Homeric hillside towns with a beautiful view over the Ionian Sea.

-To the public Roman Baths (Thermae) of the 2nd century A.D. An impressive
T-shaped bath complex.

13:30 Lunch at the fish restaurant “Captain Del Mare” by the sea, in the beautiful village of Krioneri (“cold water”) lying under the imposing rock of Mount Varassova.

FRIDAY 25 May 2018
09:00- 20:00 Departure by coach to Zitsa and Ioannina for a day excursion, offered by the London Byron Society. We’ll visit the mountain village of Zitsa, including a tour of the Monastery of Prophet Elias where Lord Byron stayed on October 1809 and which inspired Childe Harold’s famous stanza on “monastic Zitsa. ”The Women Society of Zitsa” will offer us a feast of local delicacies (pies) and the famous Zitsa wine in the “Archodariki’’ of the Monastery.

In the afternoon we’ll go to Ioannina. The city of Ioannina, next to the lake Pamvotis, is the capital of Epirus, north-western Greece. Lake Pamvotis lies at the centre of a 480- metre-high basin in a picturesque mountain setting, with the Kyra Frosyni Island in its middle and the sprawling city of Ioannina on its western shores. Natural beauty and historic and modern buildings come together at Ioannina, offering a vibrant and contemporary city comprising the most important commercial and cultural centre in Epirus and north-western Greece.

A walk along the lake shores and below the castle walls next to historical places and buildings conjures up legends such as that of Kyra Frosyni. She was sentenced to drown in the lake after having caught the eye of Ali Pasha, who fell desperately in love with her. The medieval castle within the citadel is also worth visiting. The tomb and the headquarters of Ali Pasha, the latter visited by Byron, can also be found here. Dinner on your own.

SATURDAY 26 May 2018
Last breakfast at the Hotel Theoxenia will end the Conference.