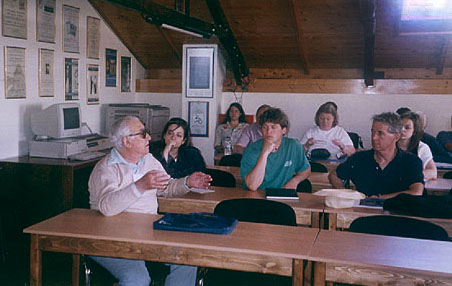 With great sorrow, we report the death on December 8, 2017, of Professor Marios Byron Raizis, a pillar of Byron studies internationally and in Greece and a founding advisor and continuing supporter of both the Messolonghi Byron Society and the Messolonghi Byron Research Center. Professor Raizis, who held graduate degrees from Purdue University and New York University, taught for many years at Southern Illinois State University before joining the English faculty of Athens University in 1978. Well known as a scholar publishing on Romantic literature, especially Lord Byron, Professor Raizis was also a Greek-to-English and English-to-Greek translator of Solomos, Seferis, and other poets.

For many years a Joint International President of the International Association of Byron Societies, Professor Raizis participated for decades in scholarly conferences worldwide. But we particularly remember and love him for his warm and faithful support of the International Student Byron Conferences, which have been held since 2002 in Messolonghi. Whether chairing panels, sharing his own scholarly expertise, advising students on their work, or offering on-the-spot translations or historical lectures, Professor Raizis played a foundational part in setting the welcoming, democratic tone characterizing the community of scholars that gathers in Messolonghi for the International Student Byron Conferences. His many friends from the conferences will always remember Professor Raizis, fondly nicknamed “the Admiral,” sporting his nautical cap and sunglasses on the terrace of the Theoxenia Hotel, in the Garden of Heroes, or at the Messolonghi Byron Research Center as he generously shared his knowledge and his passion for Byron with rising generations. We will miss Byron Raizis’s genial and inspiring presence.