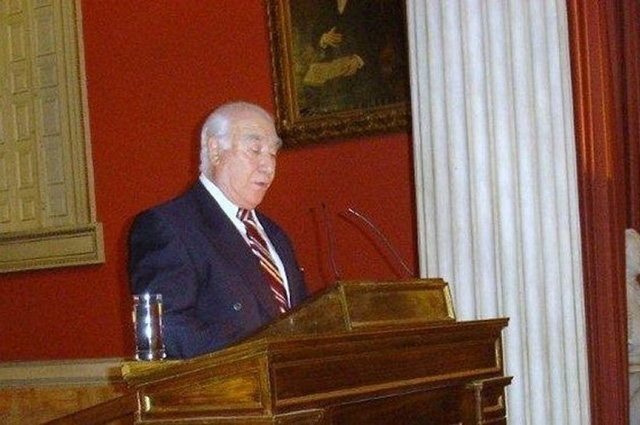 The International Association of Byron Societies (IABS) is very saddened to learn of the passing of Professor Emirates Marios Byron Raizis.

A graduate of Purdue University (M.Sc.) and of New York University (Ph.D.), Professor Marios-Byron Raizis joined the Faculty of English Studies at the University of Athens in 1978 and attained the status of Full Professor of English Literature and the ex-officio Head of the Faculty. His research and publications focused primarily on the area of English Metaphysical and Romantic poetry, as well as in comparative literary studies of Greek and English letters; he has also studied and translated modern Greek poetry into English. A distinguished Byron scholar, M. B. Raizis was President of the Hellenic Byron Society since 1988. And during the last decade he was completely devoted to The Messolonghi Byron Society, as Director of Studies.

A former International President of the International Byron Society (IBS) for many years, he was professor of English at the University of Athens, where he taught since 1978. Before that, he was professor of English and comparative literature at Southern Illinois University, Carbondale. A frequent contributor to scholarly journals, he was also known as a translator from Greek into English and English into Greek.

His works include: Dionysios Solomos; Greek Revolution and the American Muse: A Collection of Philhellenic Poetry, 1821–1828; The Metaphysical Poets of England, and The Poetic Manner of George Seferis (1977) among many others. Prof. Raizis attended international conferences with regularity, contributing his expertise on Marko Botsaris, the legend of Prometheus, and Byron’s involvement in the Greek War of Independence.

During the International Student Byron Conferences, Messolonghi, he is well remembered for his impromptu lectures and spot translations on Greek history in the Garden of Heroes in Messolonghi, Ithaca, and other locations. Students remember him as a painstaking editor of their own work in proceedings from the conferences.

He chaired many panels and led discussions, most recently in Venice, Italy, and created an atmosphere of conviviality and mutual respect between all conference participants. With typical generosity, Prof. Raizis compiled invaluable collections of verse about Greek history and literature, such as Angelica Palli’s “To Byron” (1824) compiled for the Messolonghi society (View here)

He also edited Byron: A Poet for All Seasons – 25th International Byron Conference and Tour 1-8 September 1999, Athens – Messolonghi – Jannina – Zitsa; and Lord Byron: Byronism, Liberalism, Philhellenism; Proceedings of the 14th International Byron Symposium, Athens, 6-8 July 1987, which have been useful to so many scholars.

He will be sorely missed and remembered the world over for his vivacious personality, his scholarly contributions, his services for the IABS, his personal warmth, and his formidable reading in Greek and American literature.

Prof. Raizis’s legacy will live beyond his departure.