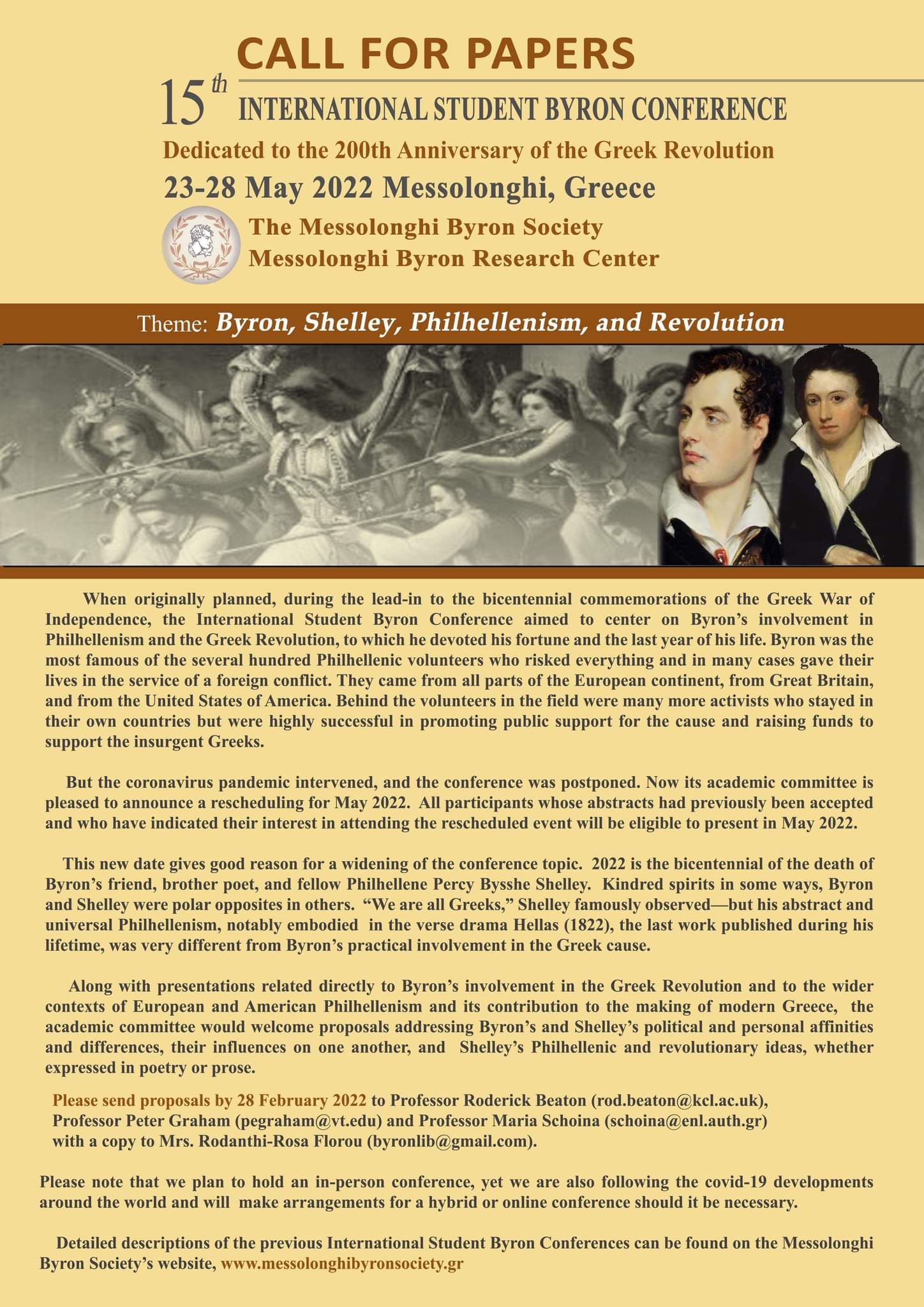 When originally planned, during the lead-in to the bicentennial commemorations of the Greek War of Independence, the International Student Byron Conference aimed to center on Byron’s involvement in Philhellenism and the Greek Revolution, to which he devoted his fortune and the last year of his life. Byron was the most famous of the several hundred Philhellenic volunteers who risked everything and in many cases gave their lives in the service of a foreign conflict. They came from all parts of the European continent, from Great Britain, and from the United States of America. Behind the volunteers in the field were many more activists who stayed in their own countries but were highly successful in promoting public support for the cause and raising funds to support the insurgent Greeks. But the coronavirus pandemic intervened, and the conference was postponed.

Now its academic committee is pleased to announce a rescheduling for May 2022. All participants whose abstracts had previously been accepted and who have indicated their interest in attending the rescheduled event will be eligible to present in May 2022.

This new date gives good reason for a widening of the conference topic. 2022 is the bicentennial of the death of Byron’s friend, brother poet, and fellow Philhellcnc Percy Bysshe Shelley. Kindred spirits in some ways, Byron and Shelley were polar opposites in others. “We are all Greeks,” Shelley famously observed—but his abstract and universal Philhellenism, notably embodied in the verse drama Hellas (1822), the last work published during his lifetime, was very different from Byron’s practical involvement in the Greek cause.

Along with presentations related directly to Byron’s involvement in the Greek Revolution and to the wider contexts of European and American Philhellenism and its contribution to the making of modern Greece, the academic committee would welcome proposals addressing Byron’s and Shelley’s political and personal affinities and differences, their influences on one another, and Shelley’s Philhellenic and revolutionary ideas, whether expressed in poetry or prose.

Please note that we plan to hold an in-person conference, yet we are also following the covid-19 developments around the world and will make arrangements for a hybrid or online conference should it be necessary. Detailed descriptions of the previous International Student Byron Conferences can be found on the Messolonghi Byron Society’s website, www.messolonghibyronsociety.gr