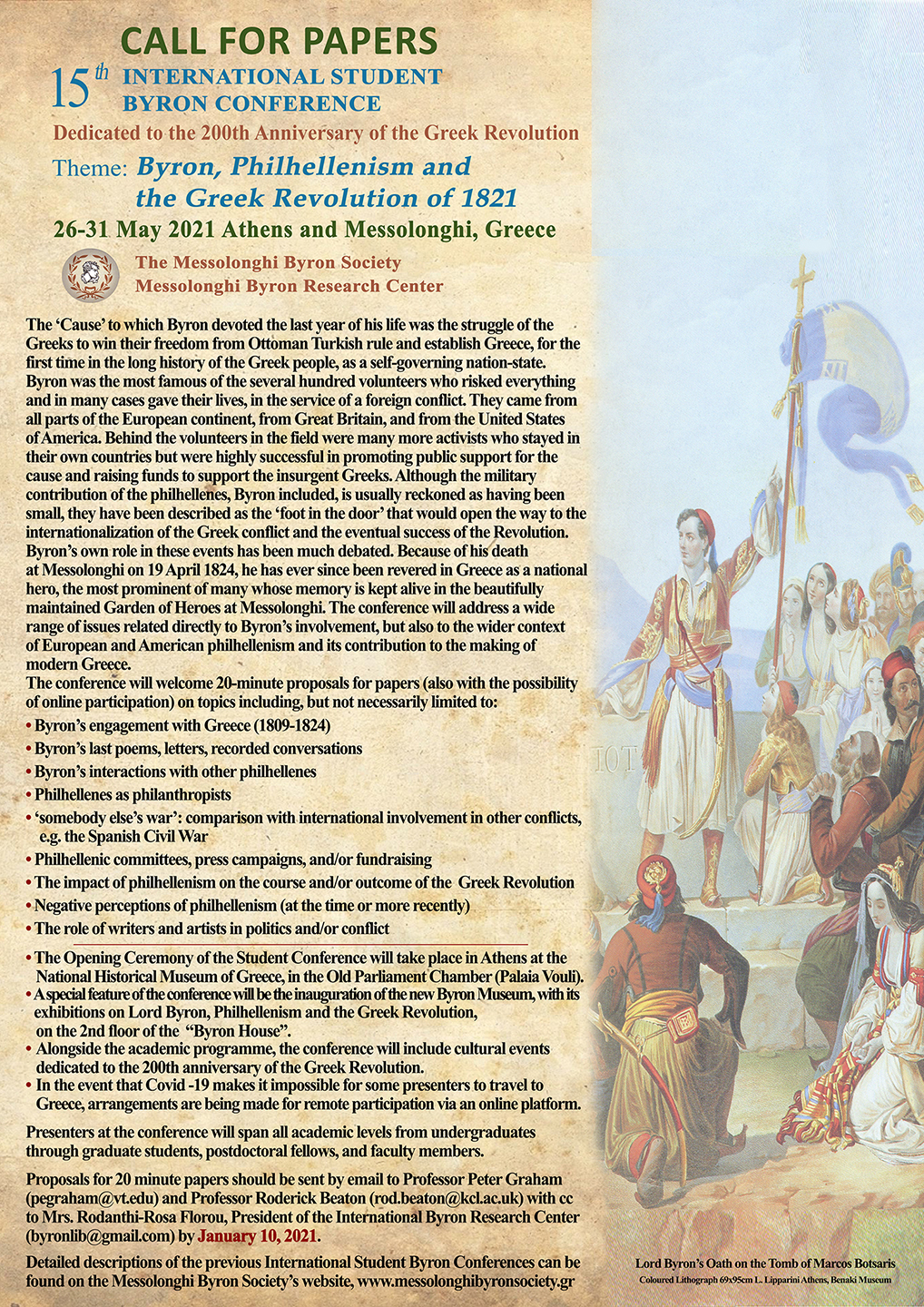 Theme: Byron, Philhellenism and the Greek Revolution of
1821

The ‘Cause’ to which Byron devoted the last year of his life was the struggle of the Greeks to win their freedom from Ottoman Turkish rule and establish Greece, for the first time in the long history of the Greek people, as a self-governing nation-state. Byron was the most famous of the several hundred volunteers who risked everything and in many cases gave their lives, in the service of a foreign conflict. They came from all parts of the European continent, from Great Britain, and from the United States of America. Behind the volunteers in the field were many more activists who stayed in their own countries but were highly successful in promoting public support for the cause and raising funds to support the insurgent Greeks. Although the military contribution of the philhellenes, Byron included, is usually reckoned as having been small, they have been described as the ‘foot in the door’ that would open the way to the internationalization of the Greek conflict and the eventual success of the Revolution. Byron’s own role in these events has been much debated. Because of his death at Messolonghi on 19 April 1824, he has ever since been revered in Greece as a national hero, the most prominent of many whose memory is kept alive in the beautifully maintained Garden of Heroes at Messolonghi. The conference will address a wide range of issues related directly to Byron’s involvement, but also to the wider context of European and American philhellenism and its contribution to the making of modern Greece.

The conference will welcome 20-minute proposals for papers (also with the possibility of online participation) on topics including, but not necessarily limited to:

The Opening Ceremony of the Student Conference will take place in Athens at the National Historical Museum of Greece, in the Old Parliament Chamber (Palaia Vouli).

A special feature of the conference will be the inauguration of the new Byron Museum, with its exhibitions on Lord Byron, Philhellenism and the Greek Revolution, on the 2nd floor of the “Byron House”.

Alongside the academic programme, the conference will include cultural events dedicated to the 200th anniversary of the Greek Revolution.

In the event that Covid-19 makes it impossible for some presenters to travel to Greece, arrangements are being made for remote participation via an online platform.

Proposals for 20 minute papers should be sent by email to Professor Peter Graham (pegraham@vt.edu) and Professor Roderick Beaton (rod.beaton@kcl.ac.uk) with cc to Mrs. Rodanthi-Rosa Florou, President of the International Byron Research Center (byronlib@gmail.com) by January 10, 2021.

Detailed descriptions of the previous International Student Byron Conferences can be found on the Messolonghi Byron Society’s website, www.messolonghibyronsociety.gr