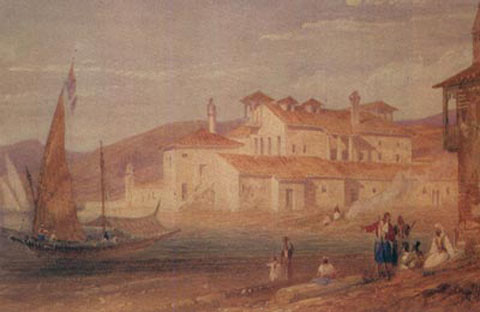 The Board of Directors of the Messolonghi Byron Society has decided to organize several events in 2014 to celebrate the anniversary of the 190 years since Lord Byron’s death in Messolonghi, on 19 April 1824.

Wednesday 22 January 2014 (this took place successfully)
To celebrate the anniversary of the 226 years since Lord Byron’s birth on 22 January 1788, the Art Historian Dr. Fani-Maria Tsigakou, Curator of the Benaki Museum in Athens, will deliver a lecture on the topic of “Lord Byron in the Arts”. Byron Dinner and cutting of the New Year’s cake will follow the event with a variety of orchestral music.
Place: Theoxenia Hotel, Conference Hall.
Time: 7:00 p.m.

Monday 17 March 2014
Α) The National Opera House in collaboration with the M.B.S will present in Messolonghi extended parts of Giuseppe Verdi’s earliest opera “The Corsair,” a work based on Byron’s homonymous romance in verse, the action is set in a Greek island in the Aegean as well as in Koroni of Peloponnese during the last years of the Turkish domination. “The Corsair,” an opera in 3 acts, was firstly performed on stage at Trieste on 25 October, 1848. The opera features as a music-stand event, it is accompanied by piano and involves the following soloists: the soprano Sofia Kianidou, the soprano Myrto Bokolini, the tenor Domitris Nalbantis, and the baritone Arcadios Rakopoulos. Michalis Papapetrou is the pianist.

Β) Professor Andrew Stauffer from the University of Virginia, US, will introduce to the audience Byron’s famous Eastern Tale “ The Corsair”. His talk will be translated.
Place: The Trikoupi Cultural Center of Messolonghi.
Time: 7:30 p.m.

C) Dr. David McClay, Senior Curator at the National Library of Scotland will give a seminar on the John Murray archive in the Byron Research Center on 18 March.

Β) Concert by the Friends of Music Association of the Orchestral Department, “Dionysios Solomos.”
Place: The Trikoupi Cultural Centre of Messolonghi
Time: 7:00 p.m.

Wednesday 21st to Sunday 25th May, 2014
Under the established institution of Student Conferences, the Messolonghi Byron Society has already sent a call for papers to Universities in Greece and abroad with the theme: “Byron’s Life and His Eastern Tales”

Riding the wave of his Childe Harold fame during the years 1813-18, Byron wrote a series of narrative poems, loosely categorized as the Eastern Tales, that variously blend the exotic and the erotic, explore different aspects of the many-faceted Byronic hero (and heroine), and employ an intriguing range of poetic and narrative strategies. Composing these texts, Byron both sustained his celebrity and blew off steam during a tempestuous time in his life. In the Eastern Tales, he sometimes expressed and sometimes escaped from his adventures as the literary lion of Whig society.
– Plenary Speakers: Professor Jonathan Gross, De Paul University, Chicago US and Dr Stephen Minta, University of York, UK.
– Proposals for 20-minute papers may center on any aspect of Byron’s poems, prose, and life during the time of the Eastern Tales.
Please submit 250-word proposals by email to Professor Peter Graham (pegraham@vt.edu) and to Dr Maria Schoina (schoina@enl.auth.gr) by 15 February 2014.

Also last November 2013
The Messolonghi Byron Society, under its program for 2014, and in order to celebrate the 190th anniversary of Lord Byron’s death in Messolonghi on 19 April 1824, announces an essay-writing contest for high school students of the Aetolia-Acarnania Region on the topic: “Lord Byron: Poet and Hero”.
The essays should be written by students at home and delivered to the Principles of their high-schools by Friday, 7 February 2014. Papers, which should be 600 words in length, must be typed on a computer using the font Times New Roman 14 and be single spaced. Principals of high-schools, after they have collected each student’s information, are requested to send the essays to the Directorate of Secondary Education by Friday, 14 February 2014. Students will be awarded prizes at a special ceremony at The Messolonghi Byron Society, which will take place in Messolonghi in March 2014. Professors from foreign universities will be attending the ceremony. The three best papers will be given the following prizes: 1st prize: 500 euros, 2nd prize: 300 euros, 3rd prize: 200 euros.

Any Byron fan that will happen to be in Greece is welcome to join the events.