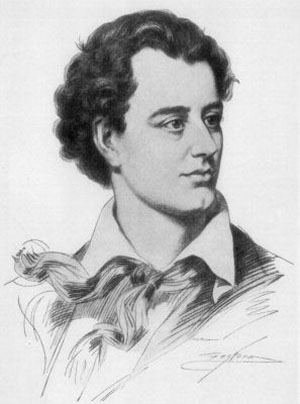 George Gordon Noel Byron, 6th Baron Byron, was born 22 January 1788 in London and died 19 April 1824 in Missolonghi, Greece. He was among the most famous of the English ‘Romantic’ poets; his contemporaries included Percy Shelley and John Keats. He was also a satirist whose poetry and personality captured the imagination of Europe. His major works include Childe Harold’s Pilgrimage (1812-18) and Don Juan (1819-24).
He died of fever, while engaged in the Greek struggle for independence.

On 5 January 1824 Byron crossed to Missolonghi, a marshy, unprepossessing, besieged mainland town he had visited years before. Leading a force of Suliote troops paid entirely out of his pocket, Byron intended to play a soldier’s role despite his lack of military training or experience. On arriving in Missolonghi, he wrote, “I take it that a man is on the whole as safe in one place as another–and after all he had better end with a bullet than bark in his body” (Byron’s Letters and Journals, L.A.Marchand, 11:107). His aim was to capture the Turkish-occupied fortress of Lepanto at present-day Nafpaktos, but the arrival of Ottoman naval forces delayed his plans.

The house of Kapsalis,
Lord Byron’s residence in Messolonghi

The house was on the west side of the town, at the “Kapsaleika” quarter. It was on the quay which was used only by the small boats which could cross Messolonghi’s lagoon only by way of one canal. The house was blown up by Christos Kapsalis on the night of the ‘Sortie’. From the few stones which survived from its ruins a commemorative stele was erected on the site in 1924. This stele was taken apart in World War II by the occupational army in order to build a cannon mound. (The above information was kindly given by Mrs S. Alexandropoulou). Byron and his men occupied the upper floor while the ground floor was occupied by Byron’s bodyguard of Souliotes.

Byron bought this costume in Epirus. As he wrote to his mother (12 November 1809): “P.S. – I have some very ‘magnifiques’ Albanian dresses, the only expensive articles in this country. They cost fifty guineas each, and have so much gold, they would cost in England two hundred”