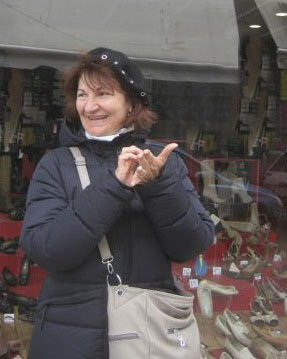 Before heading to Missolonghi, I found out there was a Byron Society there. I’d hoped there was something … a museum, a memorial, maybe even a local group dedicated to Lord Byron in some way. So I was happy to find out there was, and I emailed the president, Miss Rosa Florou.

After Hester and I got off the bus, walked through the rubble of the city’s walls, found the Hotel Liberty and checked in, I called Miss Rosa Florou. She was always “Miss” Rosa Florou in emails. Over conversation in the half a day we spent with her I found out she was married and busy with her son’s upcoming wedding in Athens, so “Miss” was an honorific that didn’t exactly translate. But after all those emails, that’s what she was to me.

She came to the hotel to pick us up. I remember trying to tell her where it was on the phone, but she said she knew it. There were only two hotels in town, so obviously she knew it.

Right now I’m searching my mind for a way of calling someone a character, or an original, without belittling them in any way. Because Miss Rosa Florou is an amazing, hilarious, over the top woman, a character and an original, but one you’d do well to take very seriously while laughing.

She knows everything about Missolonghi, everyone in Missolonghi, and a whole lot about Byron’s meaning to the place. She isn’t really the president of the society so much as she is the society. She founded it, she runs it, she got it part of an impressive building on the water, she runs conferences that come to town … Byron is in safe hands in the town where he died. He would put her into the next canto of Don Juan if he could be resurrected and see what’s going on with his legacy. She’d be the star of Canto 18, and deservedly so.

She picked us up and showed us around the part of the town near the hotel. A little shrine in a park across the street was dedicated to the heroes of the Greek War of Independence (the reason Byron came to Missolonghi in 1824). It’s a tiny little place with artifacts, cheap little religious statues, candles, and it’s covered in little inscriptions. All in Greek, of course.

Across the street you find the Garden of the Heroes. Miss Rosa Florou told us of the Exodus – not the Biblical one, but an important moment in the Greek War of Independence against the Turks.

The Greeks in Missolonghi revolted against Turkish rule in 1821. They came under siege in 1822. They resisted. Then two armies advanced on the city in 1825. The people of Missolonghi held out for a year before deciding to leave. Their departure from the city in April 1826 is called the “sortie” and the “exodus”.

These sieges and the exodus single Missolonghi out as one of the leading places in the war. The Garden of Heroes stands as a monument and graveyard to those who fought the Turks.

It’s both beautiful and bizarre. A lot of the monuments impress, some of them border on truly bad taste, but you can’t help feeling a solemnity in the air. Miss Rosa Florou explained a lot about the place, only part of which I can remember. She had a story for every statue, every memorial, and kept up a chatter that was more interesting than I’ve ever heard from a tour guide.

Then she took us into the rest of the city. I’ll get to that in the next post.