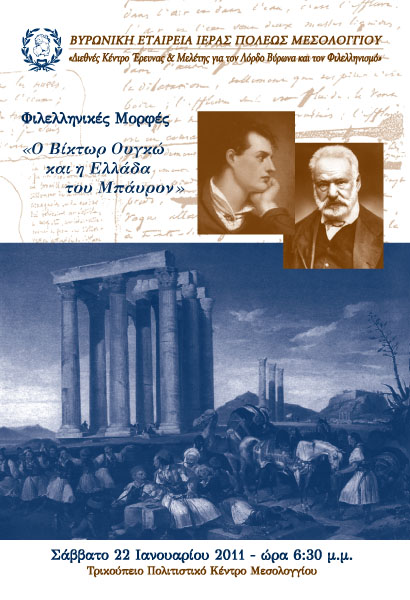 At the event of Byron’s Birthday 22 of January
The Messolonghi Byron Society
Begins its activities for 2011 with:
“Victor Hugo and Byron’s Greece”

On Saturday 22nd January 2011, at a packed Trikoupeio Cultural Centre, the Messolonghi Byron Society organized a very successful happening on the subject of “Philhellenic Figures: Victor Hugo and Byron’s Greece”.
The event was introduced by the President of the Society, Mrs. Rodanthi-Rosa Florou, and greeted by the Mayor of Messolonghi, Mr. Panayiotis Katsoulis, who spoke about the importance of the philhellenic movement and announced the creation of an international standards Philhellenic Park, built on the surrounding grounds of the Byron House.
The participants and members of the Byron Society responded positively to the proposal and the latter pledged its support through its international Byronic network. The distinguished Professor of the Department of History and Archeology of the University of Athens, Greece, Mr. Demetrius Pantelodimos, author of the widely acclaimed, Victor Hugo and Greece, written to commemorate the bicentennial of the author’s birth, then took the floor and spoke eloquently and persuasively on the philhellenic activity of Byron and of that titan of the European spirit, Victor Hugo, wining the warm applause of the audience. The philhellenic poem “The Heads of Saragios” was recited at corresponding points in the speech, as well as two letters by Victor Hugo, appealing for the support of the Cretan revolutionaries of 1866 and 1867.
Reciting these was Mr. Spyros Stamatatos, member of the “Artistic Workshop”, who impressed the audience with his spirited performance and was applauded accordingly.
The event was presented by the General Secretary of the Byron Society, Mrs. Elena Zavitzanaki, and directed by Mrs. Zeta Latta.
The event was concluded with the ceremonial cutting of the New Year’s Cake which had been previously blessed by Father Andreas, and rounded off by a reception at the foyer of the Trikoupeio Centre, where the ladies of the Byron Society treated the guests to home cooked specialties that vanished in the wink of an eye.